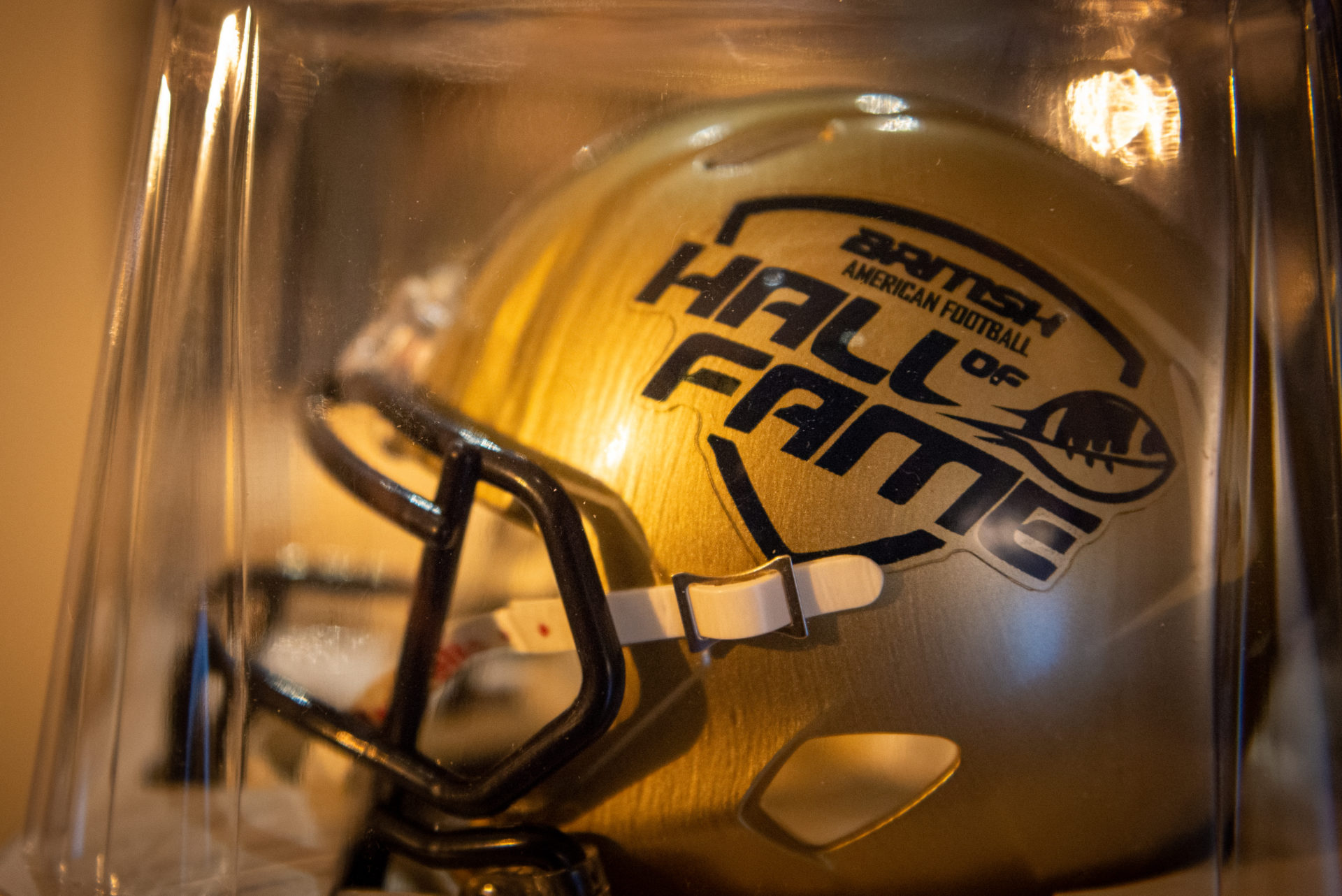 The second annual BAFA Hall of Fame induction has taken place in Manchester. Building on the inaugural year, the Class of ’22 continues the celebration of outstanding achievement within British American Football. Eight new names have been enshrined – comprising decorated former players, inspirational administrators, and selfless volunteers. Relive the occasion in words and pictures. 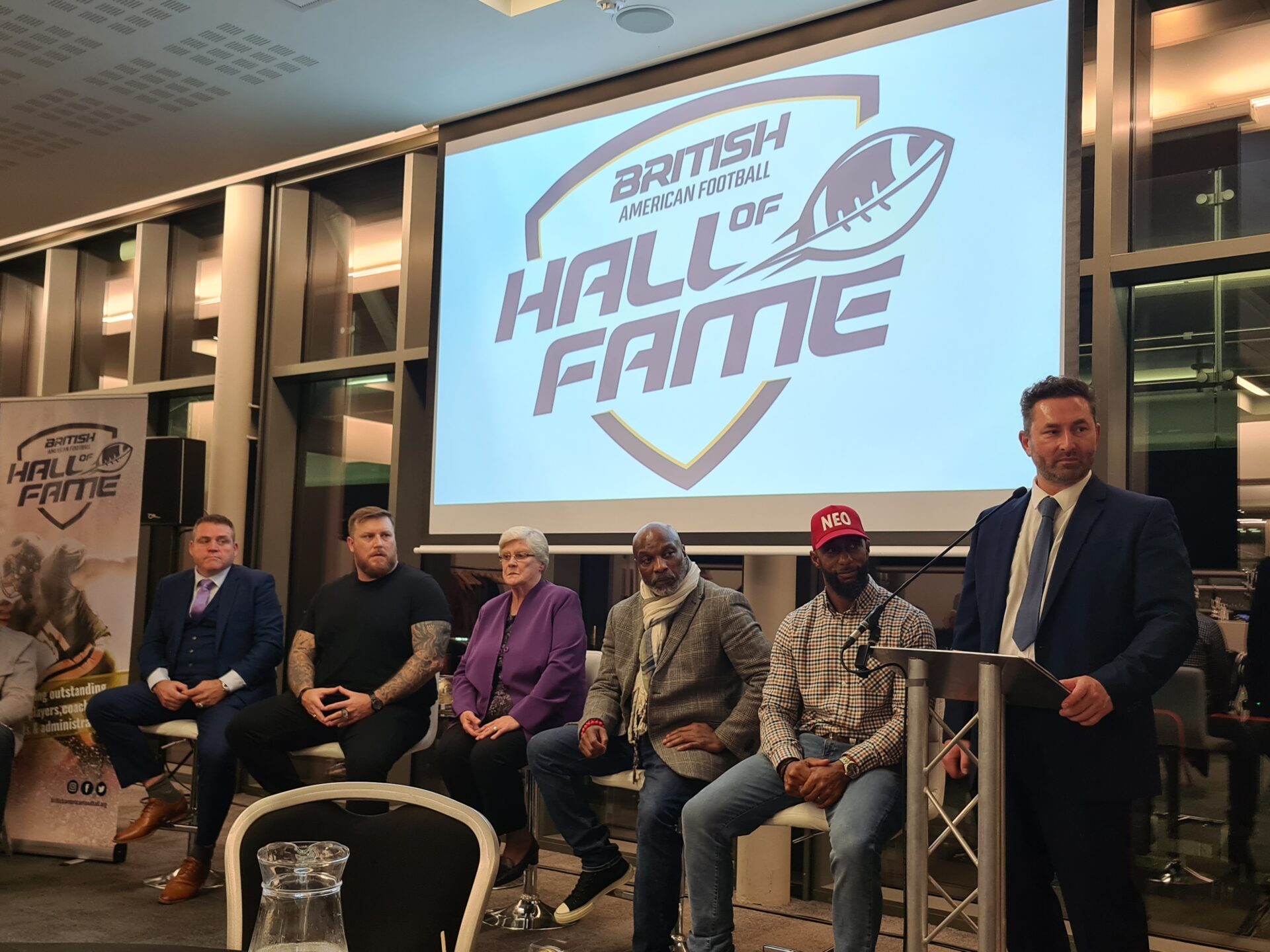 Each inductee received a personalised trophy, a framed plaque, and a rapturous round of applause from attendees after being introduced by host, Karl Walkinshaw.

Five of the eight new inductees were in attendance at the event at Old Trafford Cricket Ground and each was given the platform to say a few words as they were inducted.

Jeremy Simms – a stalwart of Britball over two decades reflected on how much he cherished the support of friends and former teammates: “There would not be a Jeremy Simms without any of you; all I did was hold onto the rope while you pulled me along,” he said.

Paul Newey, who cut an imposing figure as a linebacker for the Birmingham Bulls over a decade, delivered an impassioned speech thanking everyone involved in his career: “I wouldn’t have had an amazing career with GB, the Bulls, the Jets, without the people behind the scenes. I’ve played with lots of amazing coaches and lots of amazing people.”

He also spoke about the power of American Football to bring people together from all walks of life. This theme was echoed by another inductee, Wendy Bamford, who has dedicated much of her volunteering to developing Britball at youth level.

“It’s not my award; the award is for all the players, parents, coaches, managers, teams – from flag to youth and senior teams, who, along with BAFA, helped us to develop.”

The camaraderie between the inductees was obvious. They shared embraces and jokes as they reminisced fondly about shared experiences in the sport.

Friends, family members, and BAFA volunteers watched on with great pride and admiration – including several of the Class of 2021, including Nigel Dias, Trevor Carthy, and Scott Rowe. 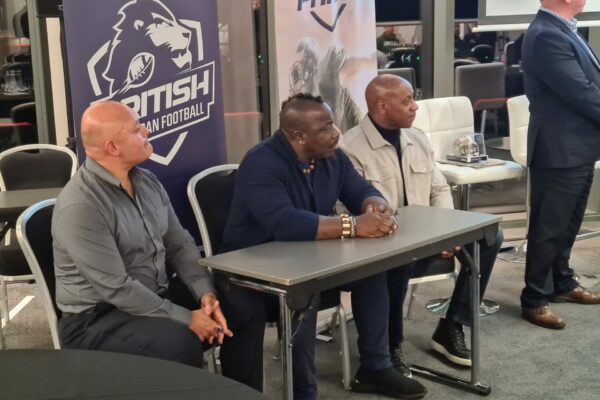 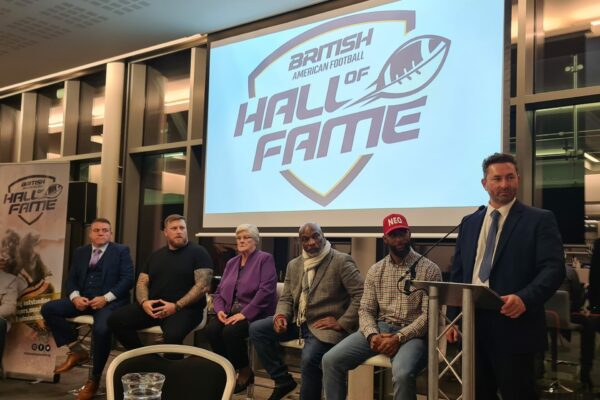 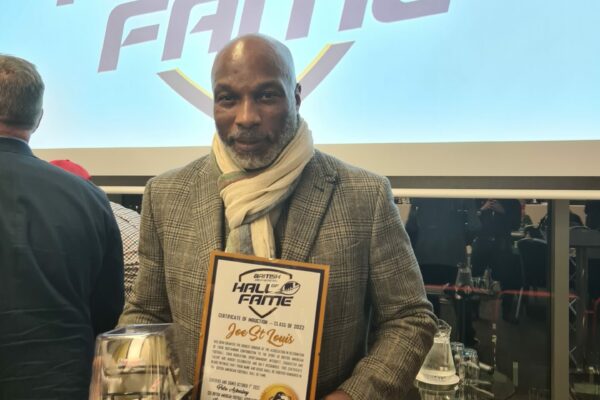 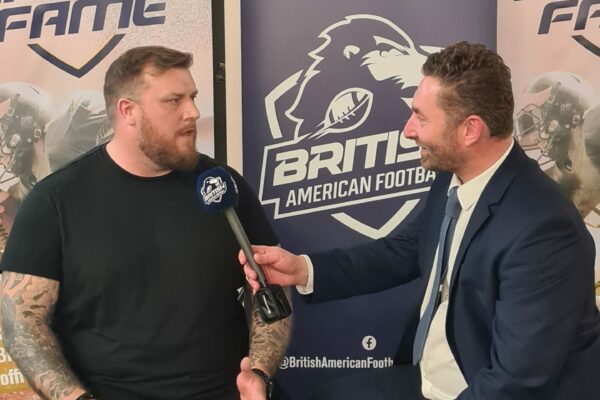 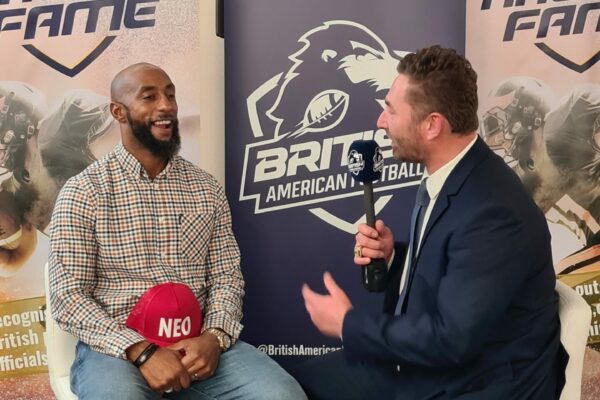 The inductees in full are: 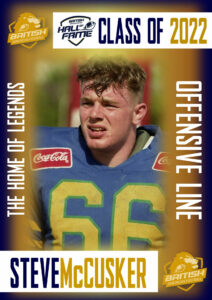 Steve began his playing career with the Glasgow Diamonds youth team before graduating to the Glasgow Lions where he was an integral part of their success. Equally adept at both run and pass blocking he became an elite level “trench technician”. He anchored the offensive line as a GB Lion and was selected as a “National player” for the Scottish Claymores of the NFL Europe League who won the World Bowl in 1996. He was also able to play to a high level on the defensive line. He subsequently became a coach for the Claymores. 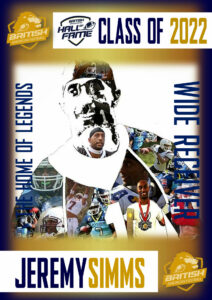 Jeremy was an elite level receiver who played at the highest level for over 20 years. He started as a junior with the London Capitals and Olympians, earning GB Youth team honours. At senior level he was a key contributor for the all conquering Olympians teams winning British titles and a Euro Cup. An ever present for the GB Lions for 12 years, he played in the semi-pro German league before joining the Rhein Fire in NFL Europe. A multi Britbowl winner with the Olympians, Coventry Jets and London Warriors he also spent time with the Milton Keynes Pioneers and was selected for the NFL Europe development Programme. He is now a well-respected coach, working with clubs and the GB national programmes. 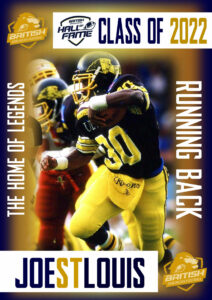 Joe was an elite level running back who was active in the eighties and nineties. Initially as part of the fearsome London Ravens back field (he was the MVP in the 1985 Championship game). He also played for the Farnham Knights and the Birmingham Bulls. He was a key member of the GB Lions European Championship winning teams of 1989 and 1991. Particularly known for his blistering breakaway speed, he played in the World League and was invited to the Chicago Bears training camp. 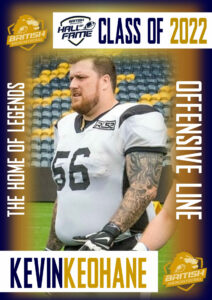 An imposing individual at 6’ 4” and over 300Lbs, Kevin Keohane anchored the London Warriors Offensive Line as they won numerous British Championships. An ever present for the GB Lions, he also spent time with the Farnham Knights and London Blitz. Known for his physicality at the point of attack and his ability to “pancake” opponents, he was also a team captain due to his leadership skills. He is currently part of the GB Under 17s coaching staff. He also appeared in the movie “Zak Synders Justice League” as a member of the Gotham City University Wildcats football team. 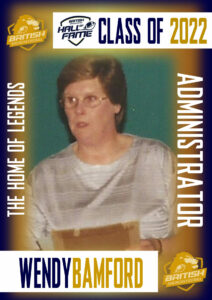 Starting in the nineties, Wendy worked tirelessly to develop youth football in Britain for a number of years, in both the Flag and contact formats. Starting at club level in Tamworth, then ultimately leading nationally as a committee member and chairperson of the youth governing bodies. She instigated inclusive structures to integrate the Scottish teams and bought all the various youth formats under the BAFA banner, where she became a board member and director. Under her guidance the national youth flag programme had great success in European tournaments. Her drive and determination made it possible for thousands of children and young adults to have the opportunity to experience American Football. 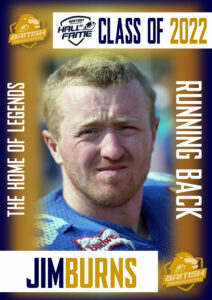 Jim was renowned as an every-down back with the Glasgow Lions in the eighties and nineties who was respected throughout the league for his toughness and ability to break tackles. Generally accepted to be the best running back not to get a GB Lions callup, he helped Glasgow become one of the top teams in Britain. He showed his grit by returning to play at an elite level following breaking his leg a few months earlier. After he finished his playing career, he went on to become an inspirational coach. 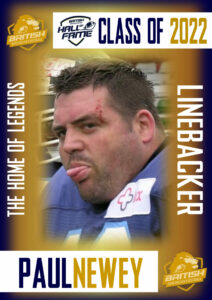 Started his Football journey with the Birmingham Bulls, where he played from 1992 until 2002 and was a standout contributor. Was a team captain for the Bulls in a number of their championship games against the Olympians, becoming a British Champion in 1995. He played for the GB Lions between 1994 and 2008 and also represented Ireland. The London Monarchs of the NFL Europe League had him on their development squad for a number of seasons too. He was a founder member of the Britbowl winning Coventry Jets team. A ferocious hitter with a never say die mindset, he was such a disruptive force that opposing teams had to scheme around him. 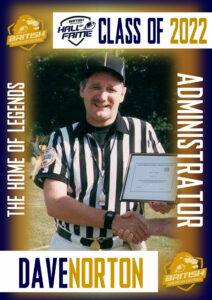 In the early stages of the games’ development in Britain, Dave Norton had the foresight to form the British American Football Referees Association to ensure the teams would have officials available for the ever-increasing number of games. Since then, he has overseen its development and growth. BAFRA are well respected internationally, supplying officials for numerous European tournaments and support officials for the NFL International Series games. The sport in Britain owes him a huge debt of gratitude for his efforts in establishing a constant and reliable source of officials.