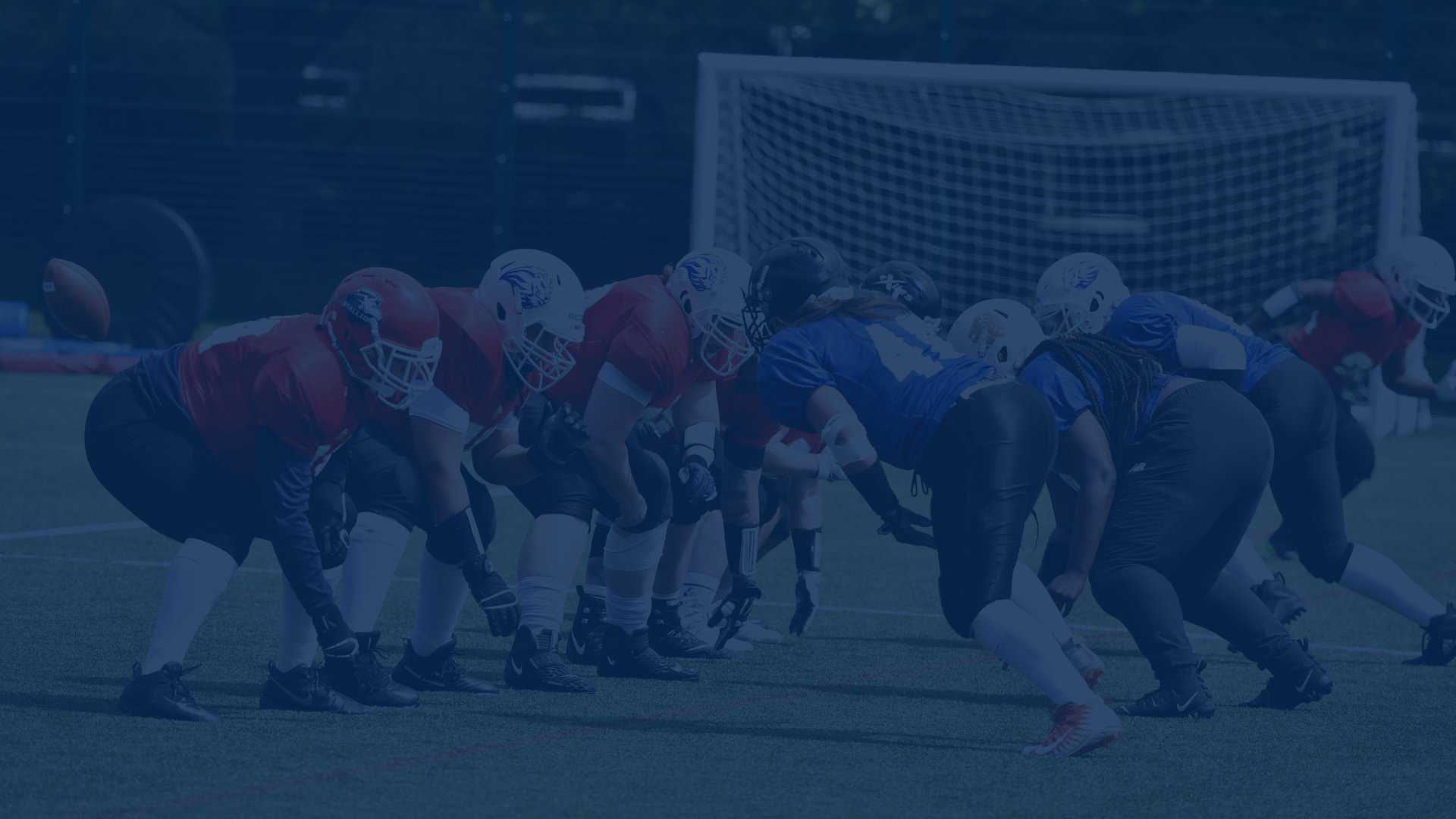 Kick-off in the 2022 IFAF Women’s World Championship is drawing near so we are once again checking in with the Great Britain players and coaches!

As the team prepare to go up against seven other nations on the world stage, we get a closer look into the defensive line, a positional group packed with energy, aggression, and charisma.

Heading up that group on the field is Delta Npuna, who was quick to emphasise the importance of those trench players within the team.

“I think the line in general is vital to the identity of the team,” she said.

“You have to have that mentality, you’ve got to be in people’s face, and that’s how you set the tone from the start.

“We are the nasty girls, but off the field we’re absolute clowns and I think having that happiness in us allows us to think clearly and be mean on the field.

“It’s controlled and channelled aggression and we can take it to a different level.” 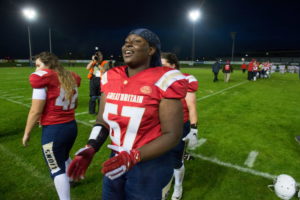 Aggression is exactly what defensive line assistant Aimee Cottingham expects from her group, and the former Great Britain player has little trouble defining the character she sees in them.

“If you could imagine somebody like Confucius with a prison record,” Cottingham explained.

“These guys are brawlers, but they think about what they’re doing and they’re constantly asking questions.

“They want to challenge the status quo, but when stuff hits the fan they’re ready to go.”

It hasn’t taken long for rookie defensive line Zoe John to understand what the Great Britain contingent are all about.

With training camp and team selection flying by, John has taken every opportunity to develop as she proudly flies the flag for Wales at this tournament.

“I think we’re a violent bunch,” she commented.

“It’s been such an incredible experience and it’s weird how fast time has gone by. I was at linebacker and then I moved to D-line in January, so it’s been two different positions, but I’ve learned a lot along the way.

“I feel like if you want to develop as a player, especially at this level, you’ve got to want to ask questions and you want to be comfortable with maybe doing the wrong thing because that’s how you learn.”

Correcting those mistakes are a coaching staff more invested than ever in developing the skills and confidence of their squad. However, for Cottingham, one of the biggest tasks is handling her move from player to coach.

“I think it’s a really challenging position to be in and it’s a really fine line between letting players know that you respect them, but ultimately wanting them to understand that you’re just there for them,” she said.

“If ever you offer any feedback you have to make it very constructive, because let’s be honest, these girls know what they’re talking about.

“It’s a massive shout out to them in a sense to help me to step up. Also I think we need to really applaud the fact that the reason that the defensive line is where it is now, is because of those rookies that have worked to push those players in the starting roles.” 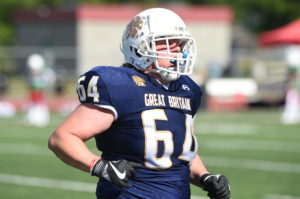 Cottingham will be swapping the helmet for a coach’s cap at this summer’s tournament.

As one of those starters, Npuna is conscious of the difference a veteran coach can make both on the field and in training. With veterans and rookies competing side-by-side and that considerable step up to 11-on-11 football, that experienced view of the squad is invaluable for the players.

“I rely on someone off the field having the perspective to be able to see things when I can’t see things,” Npuna added.

“So I think Aimee having played on the field and now being a coach is really important and it offers an important perspective for the players.”

From a rookie perspective, John similarly values the insight of someone who has stood where she now stands.

“I think it’s something I really appreciate because I mean, coaching and playing is different at different levels for different things.

“Knowing that someone’s going through the same thing, they probably know what’s going to go through your mind before you even realize it or experience it.”

While these players are making waves on the international stage, it can’t be forgotten that the work of coaches is huge for the growth of the women’s game. For Lisa Dye, formerly defensive and now offensive line for Great Britain, the impact of a figure like Cottingham will be immense.

“I think it’s really reassuring that players like Aimee want to stay part of the program as a coach to progress the team even further.

“For me, Aimee’s been my teammate for a long, long time from a player perspective, so essentially going to a tournament would feel weird and wrong without Aimee.

“Regardless of whether she’s playing or coaching, I just appreciate people like her being there.”

The time that Cottingham has had within this setup, whether it’s minutes playing on the field or hours coaching in the classroom, has given her a clear picture of what it means to her.

Fully understanding the importance of the role may not have come quickly, but it has become something far larger than an Union Jack on a jersey for Cottingham.

“As the years went by, I started to believe that, yeah, I do deserve a position, I deserve a place. So that was massively empowering to me.

“I’ve got to be honest, I’m not a massive nationalist. But the girl next to me? She’s my teammate for life. That’s what I care about. And as long as whoever I’m playing with or whoever I’m coaching, they know that I’ve got their back.

“That’s all I care about. That’s more important to me than anything else.

“If you can see it, you can be it. If girls out there can see this team, then they can see that women are out there and they’re achieving great things in the game.

“I’m a big proponent of really enjoying the fact that women can be violent, women can be aggressive, women can be physical, and that kind of transcends sport. That’s something to be applauded for.” 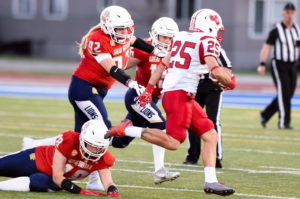 Dye will make the switch to Offensive Line for the 2022 World Championship.

Despite being a rookie, John has no hesitation in her intentions come game one, and it seems the attitude of the positional group has rubbed off on her.

“I’m ready, I’m excited, I’m just raring to go and just smack someone in the backfield,” she said.

“I think for me, I watched Aimee and Lisa at the World Championships when I was literally in my first year of football. And now it’s so exciting that’s come full circle.

“My nieces will be seeing all these amazing women. The fact that we’ve got women coaching in GB squads as well as seeing that representation and that side of things. Both sides of the ball, on and off the pitch, it’ll be eye opening for a lot of people to actually see women perform these roles in different ways.”

There will be plenty of those full circle moments for players in this squad, and as Npuna concludes, these women are forging a path for others to follow.

“I’ve had a bit of an interesting journey, starting as a development player when I was like 18.

“I’ve seen the GB team and I’ve progressed with the GB team. So now that I’m rising through the ranks, so to speak, from development to reserve to coming on at the Euros, it’s really exciting looking back and looking forward to where I can go with it.

“One of the things that I love the most about American football is the inclusivity of it. You don’t have to be petite and lean to be fast because we’ve got so big b*****s on the team who can run.

“Seeing is believing and that really helps people manifest, especially when you’ve been told your whole life that you shouldn’t do this because it doesn’t fit into what you’re supposed to be.

“Being able to see people, women, black women, anyone and everyone that’s usually underrepresented in society take on such a big stage and represent their country – It’s amazing. It’s an amazing thing for me to be part of and I hope it carries on a legacy because there’s already legacy in place.”