In just over a week, the Great Britain Women’s national team will take the field in Finland to kick off the 2022 IFAF Women’s World Championship.

Having already heard from the team’s coaching staff, we caught up with the players themselves for an eye into the squad, life at camp and the legacy they want to leave at this summer’s tournament.

The World Championship has been a long time coming, and as we hear from linebacker Rachael Moody, that anticipation is being felt by the squad.

“It’s been five years in the making since the last World’s in Canada and the squad has changed a lot since then, so I’m super excited,” she said.

“There’s massive unfinished business, especially after we came fourth at the last World’s and lost against Mexico. I think that’s only been a driver for me personally and it’s made me want to go into the gym and go and play for the adult contact team to learn some extra skills.

Pulling on the Great Britain jersey certainly doesn’t come lightly, and for defensive line Victoria Ware, that opportunity is woven into some powerful emotions.

Ware commented: “Going to World’s was literally the best thing I’ve ever done in my life. 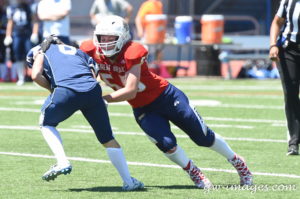 “I feel so honoured to get to do it all over again and at World’s this time. I remember watching Moody play and thinking, I want to get there. I want to do that.

“Coming third at the Euros lit a fire in the squad, and I think people are going to underestimate us, but they’re going to be so wrong to do that.”

The side’s recent travelling squad announcement showed just how diverse the team is this year, drawing on rookie and veteran talent from all over the country. Wide receiver Jessica Anderson believes that that diversity will be key to the team’s strength in this tournament.

“It’s amazing to see all of these girls coming together with the same goal, the same drive to go out to Finland and do our best in this tournament,” she said.

“I played in the last World Championship, and I still remember that feeling after the Mexico game, so I’m really looking forward to playing them again and showing them what we can do this year.”

Finland will host the Championship on the world stage, but the real grind has come in the Great Britain training camps at home. For some players this represented their first chance to join up with the national squad, but for the more experienced players, such as offensive line Yasmin Cazeau, the atmosphere and excitement of camp is nothing new.

“Every single time I leave camp I’m ready to go to the next one,” Cazeau commented.

“It’s not just being the best of the best and competing with the best across the country, but also knowing that we have to take that over to Finland and be ready to play against their best.

“I think collectively this year the team is so tight-knit, so supportive and so helpful in terms of the development process and helping us reach our goals and our full potential.” 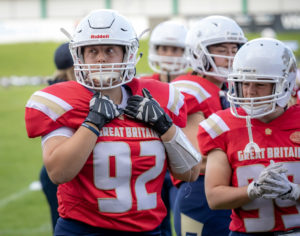 That team atmosphere is crucial for new players like running back Gabrielle Derrick, who is experiencing the demands of Great Britain camp for the first time.

“Everything is new so it has been a steep learning curve,” she said.

“But everyone has been great and figuring everything out on the fly has been quite interesting.

“I get on a lot with the running back girls and us rookies are in the same boat, coming into a new group and trying to figure it out and learn together, so it’s been a lot of fun.”

With the World Championship looming, the pressure is there to stay with the pace at camp, but as Anderson points out, the team has to strike a balance between focus and intensity.

“It really puts into perspective what we’re doing,” she added.

“Seeing the intensity from everyone when we’re out there on the pitch training together. Camp is very focussed, and it seems like at every camp everyone is pushing each other to improve.

“The coaching has been amazing this season and I have learned so much, so I really can’t wait to put that on the field and show the world what we can do.”

The Women’s World Championship represents a huge opportunity to not only celebrate the best women’s American football the world has to offer, but also recognise the development that this sport has seen in recent years.

According to Cazeau, it’s crucial that the football community comes together to appreciate how much this summer’s tournament means.

“This is a massive step forward and I feel so lucky. We have a massive opportunity to win and it’s so important in the women’s game to keep promoting those key moments and remind us that we really can do it.”

These large-scale events serve as a vital platform for the women’s game, and the hope is that this summer will impact how those inside and outside the community perceive the sport. 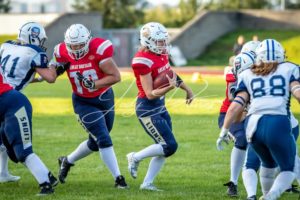 For Ware, that impact will play its part in a long-lasting legacy that this team and this tournament can leave for the future.

“Now I’m in a position of slightly more experience, it’s about bringing in the next generation and making them feel welcome so that they can flourish,” she added.

“It’s about getting new players involved, and not just new players, but also coaches that might want to bring their skills and knowledge to a women’s team.

“If we’re going to perform to the ability that we can, we’re really going to open some doors.”

Whether it’s the level of talent on this squad, the opportunity on the world stage, or the inclusive nature of the sport, this summer has huge potential for entertainment and real, positive change.

“We’ve got girls that are five foot nothing on the team standing alongside girls over six foot,” Moody commented.

“You get girls in school who think, ‘I don’t like netball, I don’t like hockey, that’s not the body type that I have’ when they see elite performance in that sport, but then they can look at American football and see somebody who looks like them.”

“We’re going to have more supporters and more fans than ever before,” Cazeau added.

“There are so many eyes on us, and I think that’s amazing.

“The whole way the camps have been set up, the ethos that we’ve created within the team, the mindset and attitude that we have going forwards into Worlds, I think that in itself is enough to inspire the next generation. It’s them who are going to carry the torch.”

Keep an eye out for even more content with Great Britain Women’s players and coaches leading into the 2022 IFAF Women’s World Championship.