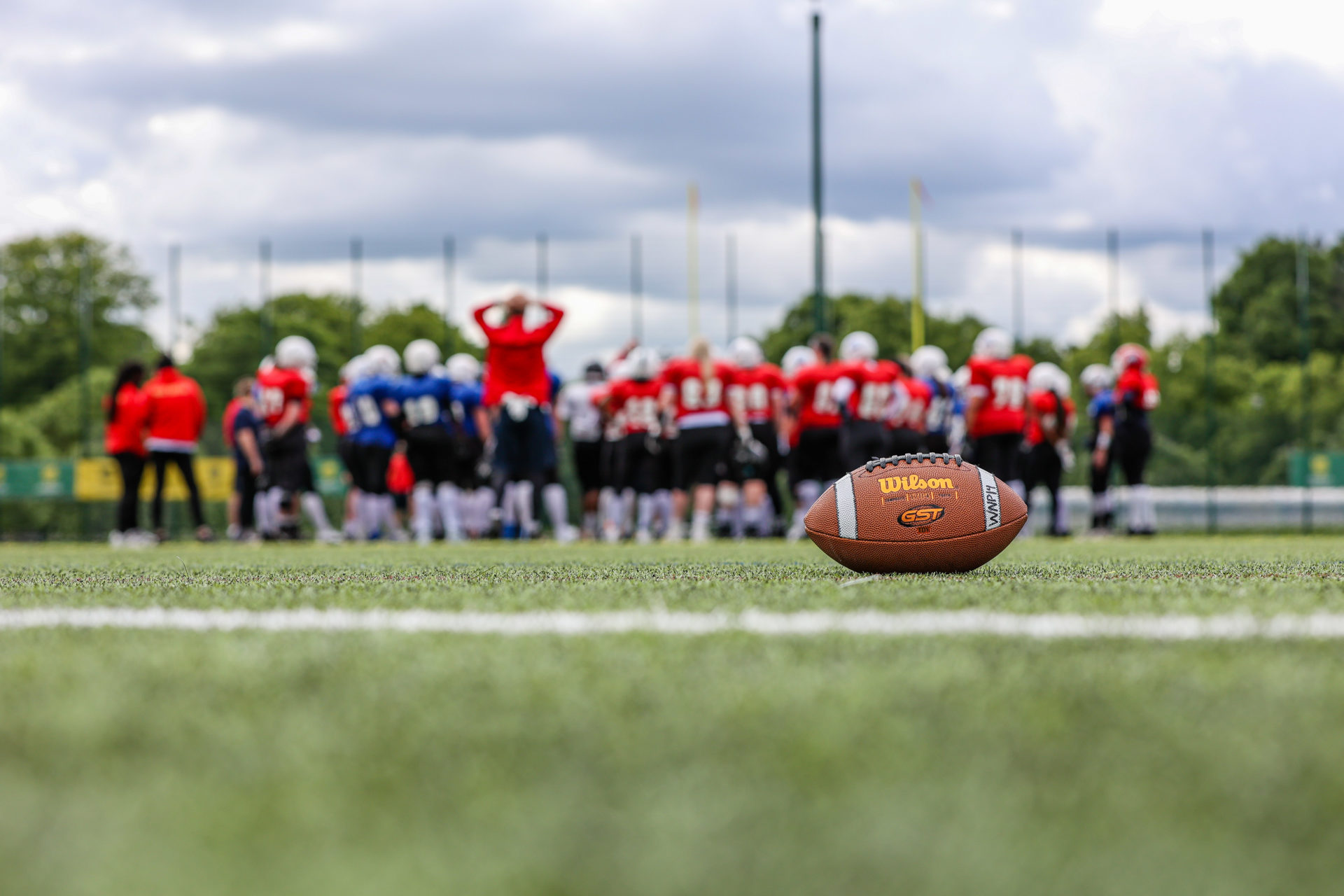 As preparations heat up for this summer’s IFAF 2022 Women’s World Championship in Finland, we checked in with three of Great Britain’s coaches for an eye into the program’s aims and ambitions ahead of the tournament.

Led by their new head coach Chris Stone, the Great Britain Women’s national team boast an impressive staff of male and female coaches, directing a diverse squad that balances youth, experience and the resilience required for the international stage.

The team includes established players and coaches determined to put this national program on the map, and according to Stone, his staff is not shying away from their expectations.

He said: “I won’t hide from it. From the first time I spoke to the girls, I said that the records are made to be broken.

“Only one person can ever be the first. And I don’t want to hide from those expectations. There’s a lot of effort, commitment and sacrifices that have been put in by players and coaches, and if we’re going to put in that much time, the goal should be to make history.” 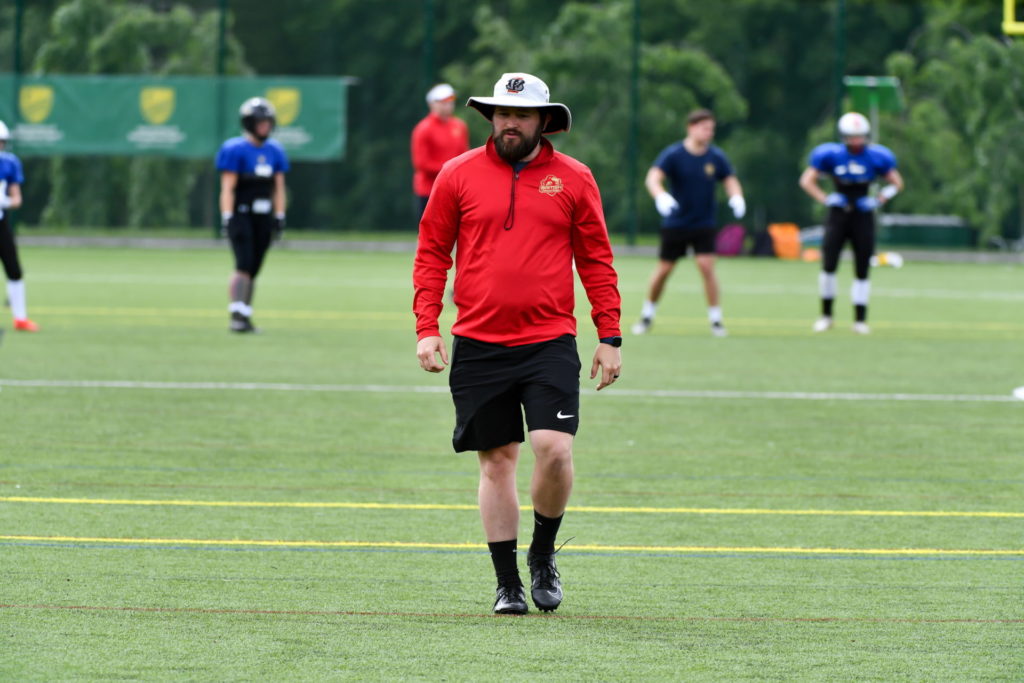 Stone has clearly driven home that goal amongst his coaching staff, and these early stages of his leadership will be critical in defining the national program moving forward.

As we hear from Offensive Line coach Connah Scholes and Defensive Backs coach Matt Gawne, the emphasis has been firmly placed on the character of the team.

“There has to be something in terms of your identity that pulls you all together,” Scholes said.

“That’s huge and it doesn’t just come from throwing a group of players together and jumping on a plane. The buy-in has to be there, and I think we’re definitely starting to see that now.”

Gawne added: “You can see them start to feed off the energy of each other as well.

“When you have the vets correcting everything and then the younger players just flying around, they’re pushing each other to take that next step and it’s great to see.” 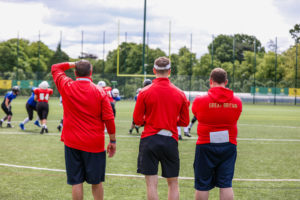 Coaches keeping a close eye on training ahead of this summer’s tournament.

Looking ahead to the tournament and what the squad is expecting of itself, Stone believes that trust has to be the driving force.

He explained: “For me, football has been synonymous with family, and that’s something I’ve always tried to bring across.

“In any program that I coach I want those relationships to be there. So much of football is about accountability and having the trust in the person that’s lined up beside you that they’re going to be able to go out and do their thing.”

Few positional groups see that element of accountability play out as clearly as the offensive line, and Scholes has plenty of reason to be excited about his players this summer.

“The size and ability you have on the offensive line would rival a lot of men’s teams.

“I enjoy walking around an international tournament with the offensive line because people know who that unit is, whether it’s because of the personalities, the way they play their game, or the actual stature of the players.” 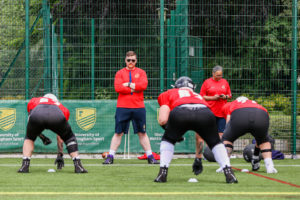 Coach Scholes looks over a drill with his positional group in training.

“Within the women’s game there’s a different attention to detail and desire for understanding as to why things are happening. That for me is exciting and something that we have managed to really build on over the last four or five years. We’ve found some really good athletes in that position.”

International competition represents a serious step up for many of the players, particularly those having to jump from 7-a-side football in the NWFL to 11-a-side with Great Britain, but there’s no doubting the potential of this squad.

A fiercely competitive roster made up of players with a real point to prove, Great Britain Women know what an opportunity this summer represents.

According to Scholes, being conscious of what this competition means to the players and coaches will be crucial in creating a connection within the program.

“It’s about being part of the Great Britain national team that went to the World Championship and did what they set out to do.

“I think that’s the special thing that bonds them, when they find that little piece of something that they hold on to. And that’s what creates the kind of team that we want as a national team. Everyone that’s played previously, they had that pride in the jersey. It’s knowing that when you’re out there, you’re doing yourself and the team as proud as everyone else back home.” 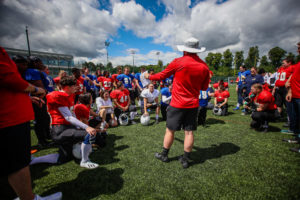 The Great Britain squad travel to Finland in just over a month’s time.

The pride, togetherness and strength of this Great Britain Women’s squad is something that will carry through far beyond this summer’s competition.

Looking forward to the development of the national program and the landscape of Women’s American football, head coach Stone is clear on the impact he wants to have.

“It’s something that I set out from day one.

“For me, this program isn’t just about Finland this summer. It’s about setting out for the next five, ten years and finding that next generation of players that are going to come through the system.

“I’ve had experience doing football at all different levels, in different countries, pretty much anything. Without a doubt, coaching the women’s national program has been the most rewarding experience I have had from a coaching perspective. I would just call on any coaches out there, if you’re not involved with Women’s football yet, make sure you find a way to, because there’s a hell of a lot of people, and not just football players, but really great people in this community.

“It’s an absolute privilege to coach these girls and regardless of what happens, I’m going to be incredibly proud of them.”

Keep an eye out for even more content with Great Britain Women’s players and coaches leading into the 2022 IFAF Women’s World Championship.

Images courtesy of All Sports Photography and GW Images.