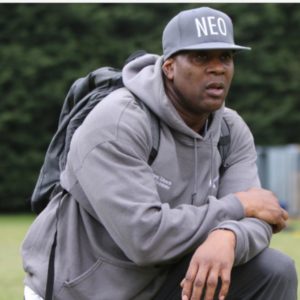 Neil came to the game as a sixteen-year-old, playing for the Finsbury Park Stallions junior side. His natural enthusiasm and energy soon saw him develop into a tough tackling linebacker and team leader. He was a key player for the London Olympians where he won six national championships and was a stand-out for the GB Lions between 1997 and 2006. In 2000, he was selected for the NFL Europe player pathway programme and transitioned to play safety where he commanded the defensive backfield. He played in the semi-pro German Football League for the Stuttgart Scorpions and then spent time in the Italian League with the Ancona Dolphins. Returning to the British league, he was the inspirational catalyst for two championship winning teams, the PA Knights in 2004 and then the Coventry Jets in 2007. With his natural leadership skills, it was no surprise when he moved into coaching. He has been the defensive backs coach for the GB Lions, as well as the head coach for the Olympians, before taking up his current role as defensive co-ordinator with the Kent Exiles. 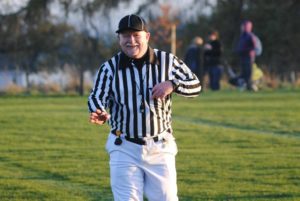 Alan started his football journey as a player with the Strathclyde Sheriffs where he played running back. His diminutive stature belied a steely determination that earned him the respect of his peers. When he finished playing, his natural leadership skills saw him develop as a popular coach in the Glasgow area, where he was responsible for the development of numerous players from the youth and junior ranks through to the adult teams. Always looking to “give back” to the game he then became a respected and beloved BAFRA official and was affectionately known as “Papa Smurf”. Such is the esteem that he is held in, that BAFRA made an annual award in his name. Overall, he made a major contribution to the development of the British game. 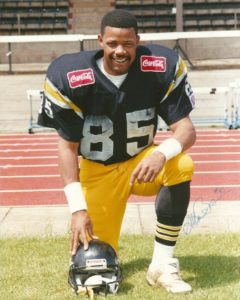 An elite-level athlete who excelled at a number of sports. His combination of speed and leaping ability allowed him to make the difficult catches look easy. He started his playing career with the Milton Keynes Bucks before playing for the Nottingham Hoods and Manchester Spartans, where he won a British Championship. An ever present in the GB Lions squads, he helped them to win two European Championships. 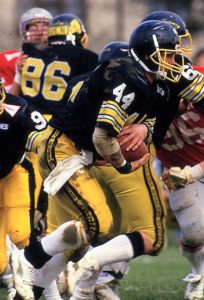 Mark was a fearsome blocker who could also find the endzone with his punishing running style. He was a captain for the all-conquering London Ravens side of the eighties leading them to numerous National Championships. He was also an integral member of the early GB Lions team. A natural leader, he retired from playing in 1988 when he was acknowledged as the game’s top Full Back. 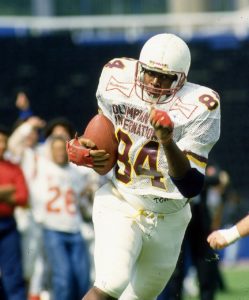 With his imposing stature and technical ability, he was one of the best Tight Ends to ever play in the British leagues. Equally adept at catching passes and blocking downfield, he was a key weapon for the London Olympians as they rose to prominence in the British game. Over his career with the Olympians, he won seven championships playing both tight and defensive end. He also won a spot on the London Monarchs roster in the World League. 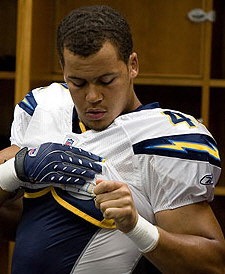 A stand-out for the London Blitz and the Great Britain Lions at youth and senior levels, his aggressive playing style got him noticed. He was league MVP in 2004. In 2008 he moved to the states and was signed to the San Diego Chargers practice squad. Back in Europe for the 2009 season, he played for the Seinjoki Crocodiles in Finland, before moving to Spain to play for the Valencia Firebats. In 2011, he became the defensive co-ordinator for the Leicester Falcons and from there he moved to Switzerland to play for the Calanda Broncos, helping them to win the Swiss national title. For the 2012 season, he was back with the London Blitz and played a key part in their Britbowl win over rivals the London Warriors.