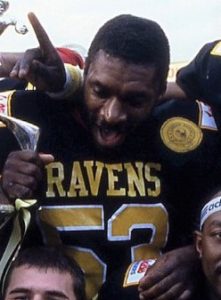 The leader of the all-conquering London Ravens defensive unit of the eighties. He had the ability to dominate the game from his middle linebacker position. He may have not been the biggest or fastest player on the field, but he was certainly the smartest! A bone jarring tackler, he was an obvious choice for the GB Lions for whom he excelled. A multi championship winner, he had a lengthy career playing at the highest level, he moved to the Farnham Knights after his time with the Ravens. 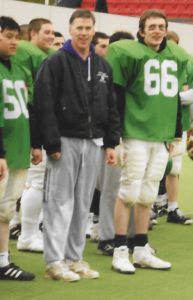 In the late eighties, he was the senior writer and director of research for NFL Properties, in the early nineties, he arrived at the University of Cambridge. Widely credited as the driving force behind the establishment of the British Universities League, he laid the foundations for the national competition that now has over eighty teams. Whilst at the University of Cambridge, he became the Head Coach of their fledgling Football team taking them to two national championships between 1991 and 1996. After Cambridge closed the programme, he became the head coach of the University of Hertfordshire, which led them through an undefeated season to another national championship in 1997. He was named national coach of the year three times. He was also the first Head Coach of the Great Britain Bulldogs (the students’ national team) leading them to victory at the European Championships in 1994 and 1996. 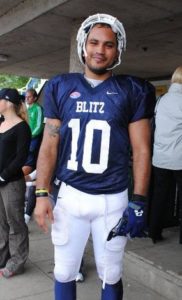 His long and successful playing career saw him feature for a number of championship winning teams and secure numerous caps for the GB Lions. He was named game MVP in 2002 as the London O’s beat the PA Knights in the British Senior League Division One Bowl. He was always likely to break the big play and was named BSL season MVP in 2004. His high level of play continued when he joined the Kent Exiles before moving to the London Blitz, where he was an integral part of their championship winning teams in Britbowls XXV and XXVI. He also became the receivers coach for the GB Lions junior’s programme. He continued his association with Britball when he founded a company that provides medical cover predominantly for American Football games.

A stand-out youth player with the Kent Rams before joining the London Olympians and earning a starting spot in his first senior season. He attended Nicholls State University in Louisiana before returning to the Olympians where he was a main stay of their British and European multi championship winning sides. Scott was a starter for the GB Lions between 1995 and 2001. He was with the London Monarchs between 1995 and 1999 before playing professionally in the European Leagues for the Madrid Panteras, Hanau Hawks and Stuttgart Scorpions. When he retired from playing after the 2005 season, he made the move into coaching, initially with the Olympians and then the Exiles. 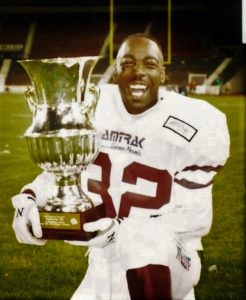 A mainstay of the London Olympians’ championship winning teams. He had the ability to always create space for himself to make the catch, often in game winning situations. His bubbly personality made him a popular teammate and opponent. Another key player for the successful GB Lions teams, he wasn’t the biggest player physically but had tremendous heart and determination. 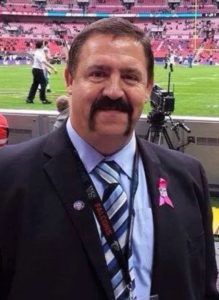 A veteran of the British scene, he started his playing career with the Wirral Wolves in 1986 and when they disbanded, he was one of the founding members of the Birkenhead Nighthawks. They would subsequently switch to using the Merseyside name. When he finished playing, he gravitated to administrative roles at both club and league levels, going on to hold key positions for the National Governing Body. An ever present at the high-profile British games he can be counted on to ensure everything runs smoothly with his pragmatic style. A stalwart of the Liverpool area teams, he is still president of the Merseyside Nighthawks.