Our journey through the glorious past continues. Here are today’s legends who will be honoured in the halls of BAFA’s Mount Olympus: 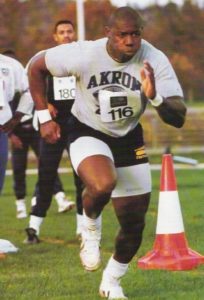 At 6’3” and 270 lbs, he was a dominant presence on the London Ravens championship-winning defence. He was one of the British players selected for the London Monarchs of the NFL backed World League via the operation discovery programme, who also spent time playing for the University of Akron in the USA. After he finished playing, he started coaching and spent a number of years with the Cornish Sharks helping develop their linemen. 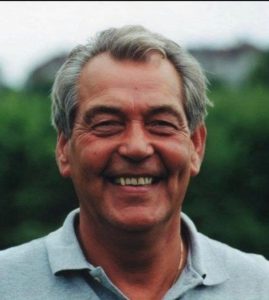 A giant of a man in more ways than one, at 6’8” he stood out in a crowd. With a background in the military and police force, he came to American Football in the 1980s as a player with the Oxford Bulldogs. Over time he became the General Manager and ultimately the club owner. Overseeing a name change to the Oxford Saints, he continued to dedicate himself to driving the game forward at both a club and national level, he was respected and admired by all who met and worked with him over his many years involved with British American Football. 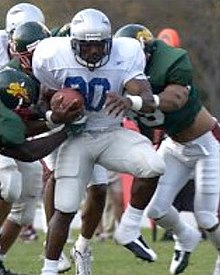 A fierce runner, he started his career with the London Gators but came to prominence with the London Olympians. He played for both the London Monarchs and Scottish Claymores in the World League in the late 1990s. His career continued in the German league with the Hamburg Blue Devils in 2000, before he returned to play in the then NFL Europe League, eventually retiring in 2004. He subsequently became a coach with the London Blitz, helping them win a Brit Bowl championship. 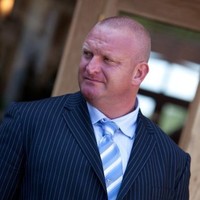 A big physical blocker whose aggressive playing style earned him the respect of all he played with and against, along with the nickname “Tango”. You certainly knew when you had been hit! A member of the successful Farnham Knights team that had both British and European success. His playing career spanned over twenty years. A proud captain for the Great Britain Lions, he moved into a successful coaching career once he hung up the pads. 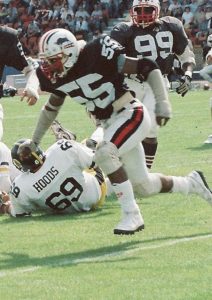 A founding member of the Birmingham Bulls defence, he had a reputation for being the hardest hitter in the league and he lived up to it! His pursuit skills and closing speed meant he would often make tackles for a loss. Offensive co-ordinators had to game-plan around him. A captain for the GB Lions who he played for between 1985 and 1989. In 1990 he moved to the Walsall Titans where he played running back and helped the team win a northern conference title. From there he went to play for the Coventry Jaguars before returning to the Bulls in 1994. He was a multi championship winner as a player who also spent time coaching once he had hung up his pads.

A freakish athlete who at 6’4” and 290 lbs had 4.6 speed over forty yards. He played for a number of British teams on the south coast including the championship winning Winchester Rifles. His athleticism allowed him to play defensive line, tight end and full back. In 1997 he was in training camp with the London Monarchs as a defensive lineman. During his first Monarchs season, he made numerous tackles, batted down a pass and even returned a kick-off. After returning for the Monarchs in 1998, he went on to play for the Scottish Claymores in 1999. When the Claymores folded, he returned to the British league and played for the Southern Sundevils.

The #bafaGOTW visits Prem North as the first-place @ManchesterTitan host the third-place @EdinburghWolves. Both teams have suffered just one defeat this season so expect a fierce defensive battle!

A 95 image sequence of @SussexThunder's Paddy Chapman grinding out the yards during the recent clash against the London Hornets!

In Week 9’s #bafaGOTW the traveling @FalconsGridiron fought a 21-7 victory over the @CaesarsFootball to go 7-0 atop the NFC 1 South. How far can the Falcons extend this winning streak?

Catch up on all of Week 9’s results & standings on LeagueRepublic.
#BritishAmericanFootball

Another busy weekend of #BritishAmericanFootball ahead!

The unbeaten @FalconsGridiron visit the 4-1 @CaesarsFootball for Sunday’s #bafaGOTW. The Falcons are currently sitting pretty atop the division, but can the Caesars start to shake things up?
(1/2)

The GB Men's Staff are proud to announce the 75 man squad that will be taking on the best in Europe later this year.

The coaching staff took into account players
attitude, ability & commitment to the team, as well as their ability to be a great leader & selfless teammate.
(1/2)