The British American Football Association (BAFA) is delighted to announce that Chris Stone will be the new Women’s National Programme Head Coach.

Chris is a native of Cincinnati, Ohio, and after playing at Springboro High School, he continued his football career at Wittenberg University. While at Wittenberg, Chris spent a semester studying abroad at Queen Mary University in London, which was the beginning of his journey in the UK.

After graduating from Wittenberg and completing a Master’s degree at Nottingham Trent University, Chris returned home to Springboro where he coached defensive backs. Now in the UK again, Chris has spent the past four years as Head Coach at Queen Mary University, as well as coaching defensive backs for the London Warriors.

In his time as Head Coach at Queen Mary University, Chris has guided the team to three playoffs and a promotion, and been named as the University’s Coach of the Year on three occasions.

“Firstly, I need to thank my wife, Heather, for letting me spend even more time dedicated to football. I’m incredibly excited about the opportunity to take lead of the Women’s National Programme.

“Every player I’ve had the opportunity to speak with so far has a truly infectious energy and I’m eagerly looking forward to connecting with all of them. It hasn’t been an easy year, but with this programme there are a lot of reasons to be optimistic. As a team, we’re going to rejuvenate the culture and reach new levels. Great Day to Be a Lion!”

“It is exciting to announce Chris as the new Women’s National Programme Head Coach. Chris’s knowledge and passion for American football has shone through, and it is a pleasure to welcome him into a strong National Programme staff.

“I look forward to getting to work right away to make sure that we push the Women’s Programme forward into a new era.” 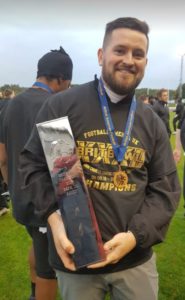